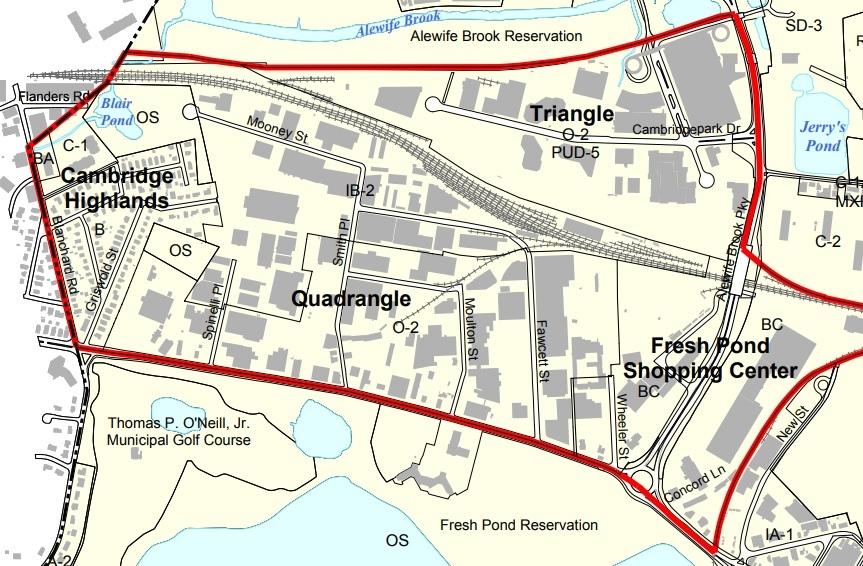 There is no Council meeting on Monday, so in this week’s newsletter I’ll share some thoughts about the Alewife area, with a focus on the Quad (pictured above – the area between Concord Ave and the railroad tracks, from the rotaries to Grove/Blanchard).

Before we get to Alewife, it is still a pandemic – closing in on a year. The light at the end of the tunnel is growing brighter – and it is still a LONG tunnel. Don’t stop masking, giving to others, and buying local. Valentine’s Day can be a day we engage in some self-care and care for others – no need to reserve it only for romantic partners. Support Cambridge artists – stop by Central Square Popportunity, and use Cambridge Local First citywide guide to find any gifts for anyone.

And, as we celebrate Black History Month, take extra care to reach out and learn more about the history of our country with a comprehensive approach. 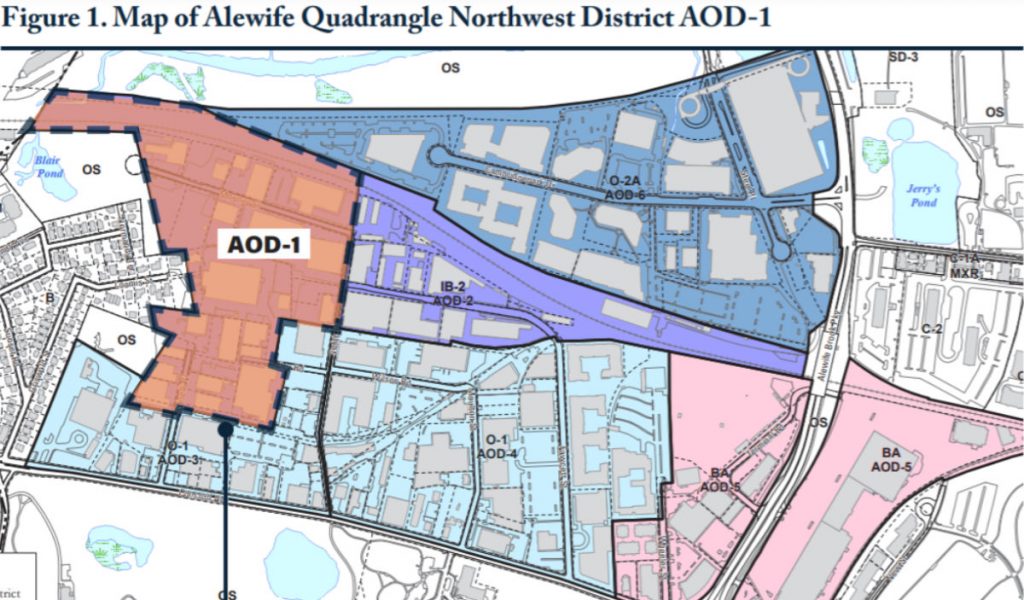 This Alewife area will almost certainly outpace the rest of the city over the next decade in population growth and development. The Alewife Quad of today consists primarily of warehouses, some manufacturing and office spaces, parking lots, few sidewalks, and no green space (except two practically secret ones with difficult access). The area will be completely reshaped in a matter of years. The transformation is already evident along Concord Avenue – the wonderful new Finch Building, the Fayerweather Street School, the developments behind Trader Joes’s – all contrast sharply with the rest of the area. What excites me is how much potential there is to shape a neighborhood, directly next to transit, that has access to schools, parks, and other community benefits, and helps create housing and jobs in our city. What worries me is the piecemeal fashion the development has been proceeding – and the lack of intention to follow our own planning documents as the city shapes this area. A coalition of neighborhood groups wrote a letter that summarizes my own concerns and dismay about the city’s approach to this area. It is (or was) inconceivable to me that the documented years of research, visioning, thoughtful summaries, planning, would yield little in specific plans or blueprints in the form of zoning and clearly articulated priorities and needs. Below are some updates and additional thoughts on the project. Please let me know what you think – and share your vision for what this neighborhood can be!

On Wednesday, the Ordinance Committee met for the second time to discuss a zoning petition submitted by the developer Cabot, Cabot, and Forbes (CCF). Zoning can often be confusing, and the situation in Alewife is no exception. The petition that is before the Council would create a new zoning overlay for AOD-1 (seen above). CFF, who drafted the petition, owns over half the property in AOD-1, but not all of it. The Council has not spoken with the additional owners within the district about this petition, which strikes me as a bit odd – we are considering a zoning change that would affect them. If the petition is approved, CCF would bring forward a special permit request that would allow them to build higher (up to 85 feet in a few places) in exchange for community benefits. It is normal for developers to ask the council to build higher and denser in exchange for benefits, and we have seen a few examples recently where the final result has truly been a win-win (see Biomed). What is most concerning to me in this process is the first step: the developer has submitted an entire overlay district because the city has failed to adequately plan the area. We are doing it piecemeal as we receive petitions from developers.

And, this petition has been presented at least three and possibly four times. Meaning the petition was brought to council, debated by some committees (Planning Board, Ordinance Committee) and deemed not ready to move forward – so it expired (there are legal timeframes that must be followed – petition must be voted up or down or if neither then automatically “expire”). Yet even now, on the third or fourth iteration, there remain many questions and concerns. As a result, I have not decided whether I can support it. I know that I cannot support it until questions are answered about implications for the whole area and city, commitments and costs.

I wish this petition was not before us, given the many open questions AND the way it is presented as a citizen petition when it is really a developer petition. However, here we are, and with this petition in front of us, I hope we do everything possible to align it with the comprehensive vision of Alewife that the city spent millions to produce. Here are my main concerns: 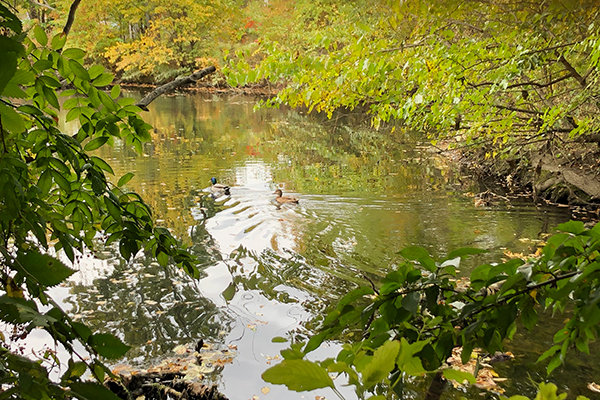 For the secret spaces: if you haven’t been over to the Alewife Quad/Highlands area lately, and you’re looking for a new place to walk and see nature, check out Blair Pond (picture above from Cambridge Plant and Garden Club). It is a DCR property on the Cambridge line – very small – right near the wonderful new public path that leads from Alewife along the newly constructed wetlands. And Rafferty Park is a sweet playground and field behind Sancta Maria hospital – (the only access is from that parking lot!). The Alewife Envision plan includes a connection from the Quad to that park – and I agree it is needed and would encourage many more residents to use it. 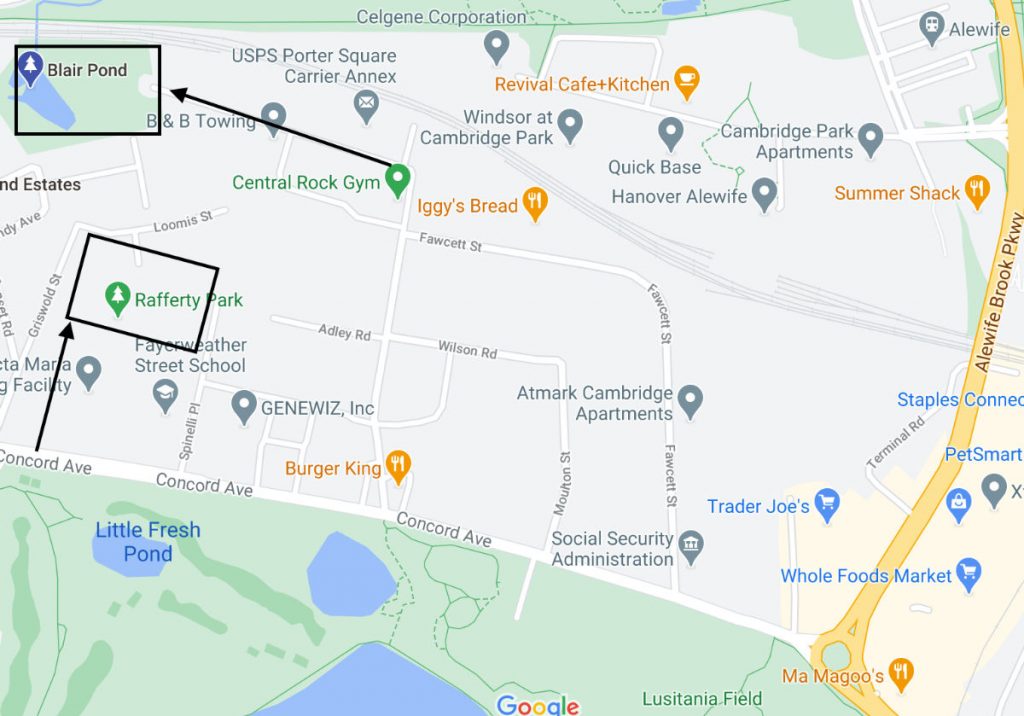